Fraudsters apparently sent out physical letters to the British, posing as a private secretary of Queen Elizabeth II, according to one of the alleged copies revealed by an exec of a local tech firm.

Paul Ridden, CEO at United Kingdom-based IT firm Smarttask, posted a picture of the letter on Sept. 24 on LinkedIn, chuckling about the apparently failed phishing scam and asking if anyone else have received something similar to that.

Dated Sept. 16, the letter claims that this is the second time so far when the Queen appeals to a “certain number of people to save Great Britain’s economy.” The letter says that the Queen’s part has already accumulated 82% of the 19 billion British pounds that must be paid to the European Union to save the economy.

In exchange for participation, the letter claims to offer the potential Bitcoin donors a 30% interest rate for a period of three months as well as the opportunity to become a Member of the Royal Warrant Holders Association. 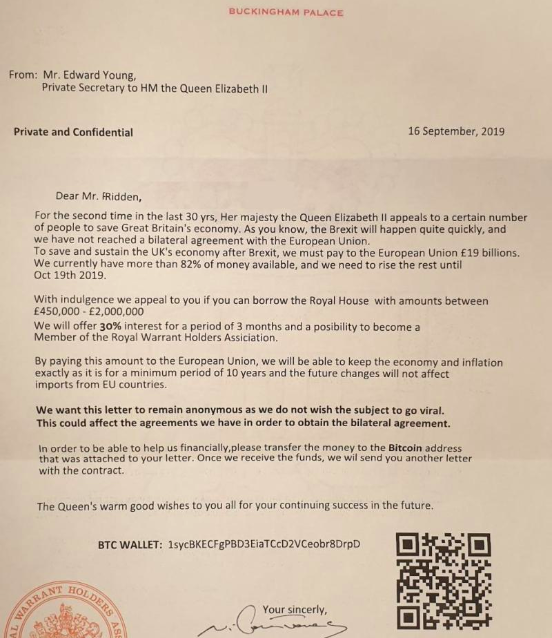 The letter sent to Paul Ridden

Following the news, British tech-focused publication IT Pro contacted Buckingham Palace, which did not reply to their comment request at press time. Ridden expressed confidence that nobody will send any Bitcoin to the fraudsters, calling the scam attempt poor due to the letter’s poor English, while also noting a reasonable level of financial awareness in Britain.

Also read: Binance claims to have assisted British prosecutors in an investigation of an online fraud that resulted in over $51 million losses by victims.